I started planning for study aboard when I was a senior in high school. After 4 years of preparation, I am finally living in Madrid, Spain for the spring 2017 semester.

I escaped Reno’s flooding and navigated my first international flight, and here is some of the first sound I heard in the city:

But we’ll get to that later. Here’s my “first take” of life in Madrid:

Like many people who enter the country, my first interaction with a Spaniard happened at the customs checkpoint in the Madrid-Barajas Airport.

The customs officer glanced at my passport and asked:

After responding, “Sí, soy estudiante de español,” we had a brief exchange in Spanish about my stay in Madrid.

Even though we spoke for 30 seconds at most, I was quite pleased with myself when he nodded that my answers were satisfactory, stamped my passport and handed it back to me.

Over the past week, I’ve received the “I-have-no-idea-what-you’re-talking-about” face countless times, but I’ve also been pleasantly surprised with my Spanish. I even explained echolocation and long division in Spanish while helping the daughter in my host family with her homework.

As I caught my first glimpses of Madrid from the bus window, one thought crossed my mind: This city is bursting with history.

The architecture, from government ministries to apartments, has an aura that says  while history has evolved, these buildings have remained the same.

It’s the image on the cover of practically every Spanish textbook I’ve used. During my first visit, I saw the Monument to Alfonso XII on a sunny Friday afternoon, with people paddling boats on the lake, running on the paths, and chatting on benches.

Around the Palacio de Cristal (Crystal Palace) buskers played the accordion while a group of boys played soccer (or fútbol). No one rushed, everyone simply enjoyed the afternoon. 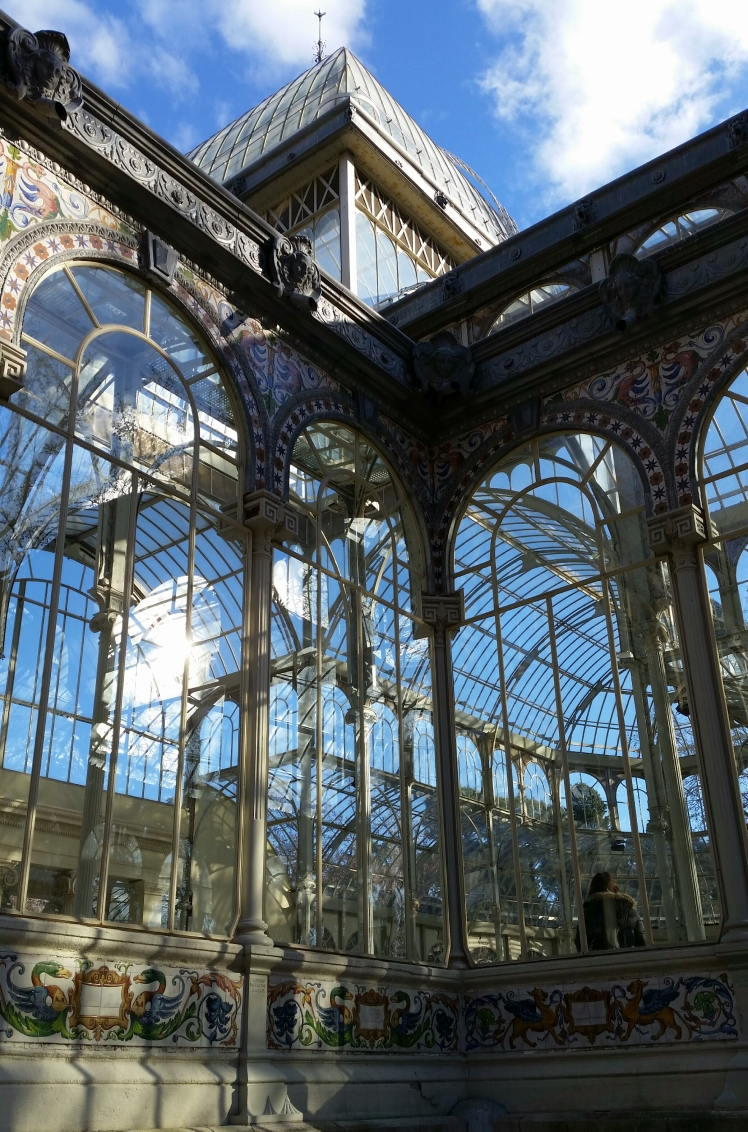 The park contains much more than these two iconic areas, and I can’t wait to visit many more times.

The quantity of famous art in one hallway of the Prado is overwhelming.

Doing a report on Goya in high school is one thing; seeing some of his Pinturas Negras (Dark Paintings) in person is completely different. As snippits of Spanish conversations floated through the air, the size, color, and texture of the paintings really made them come alive.

“Poco a poco” (Little by little)

My first day taking the bus, I turned around and asked a woman about which bus stop she would recommend I use. After I explained it was my first time taking the bus and I had a lot to learn, she simply replied,“Poco a poco.”

I’ve had people say this to me at least three times this week. Essentially, I will learn how things work “little by little.” Overall, I’ve found the metro and bus relatively straightforward, provided I am brave enough to ask my fellow commuters for help.

It´s true – in Spain, the portions of food are smaller than in the United States, but the quality is outstanding. A few things caught my eye this week:

Croquetas – Do you like mozzarella sticks? Well, these are better. Meet my new favorite tapa:

Croquetas are filled with Bechamel (the filling used in lasagna) which is usually mixed with things like ham, shrimp or vegetables.

Churros con chocolate – This was my first time trying churros with chocolate, and I will certainly be making a habit of it. A few days ago on the metro, you may have seen me cradling my container of chocolate, I just couldn’t throw it away when there were no more churros for dipping.

This is a text widget. The Text Widget allows you to add text or HTML to your sidebar. You can use a text widget to display text, links, images, HTML, or a combination of these. Edit them in the Widget section of the Customizer.
%d bloggers like this: